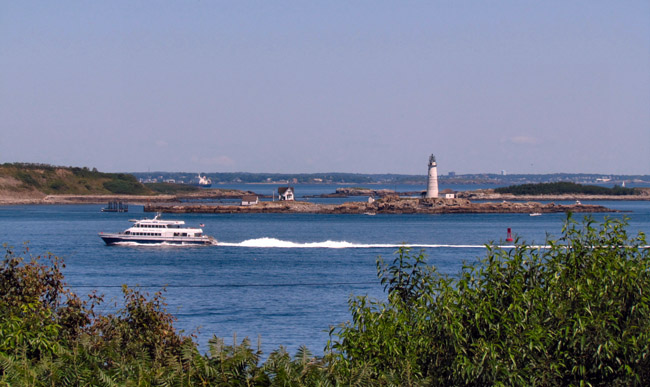 A colorful past ... a spectacular landscape!

Hull was originally named Nantaskot (or nantasket) after the Indian tribe that lived here. The name means "at the strait". When you look at the geography and terrain of Hull, it appears as a series of upland hills (somewhat like islands) that are connected by low-lying strips that resemble sandbars - together, these hills and low-lying sand strips form what is known today as the Hull peninsula. In the early colonial days, Hull served as a trading post. Hull was first settled around 1622 and was incorporated in 1644 - named after the town of Hull, England. The early settlers of Hull quickly realized the value that Hull's strategic location provided - a peninsula of land located roughly halfway between the original Pilgrim colony in Plymouth and the emeriing conomy of Shawmut that has become present day Boston.

Early industries of the day included fishing, trade and salvaging shipwrecks. The rocky sholls of the coast of Hull have been the reason for many a shipwreck of the years - there are three lighthouses located off the shore in close proximity to the coast of Hull that help mariners keep a watchful eye to avoid such tragedies for passing ships - Minot's Light (on Minot's Ledge is just off the coast of Scituate and Cohasset and Boston and Graves Lights are located just off the north facing shore of Allerton Hill near the end of the peninsula.

Lifesaving has been an important part of Hull's history. The Massachusetts Humane Society located one of its first huts of refuge on Nantasket Beach after the American Revolution. When it expanded its boat houses for lifeboats it places several along the Hull coast. Hull´s most well known lifesaver, Joshua James, became the first Keeper of the Pt. Allerton U.S. Life Saving Station, when in opened in 1889. While an exact number is not known, James and his crews are estimated to have saved over 1000 people from shipwrecks. The Hull Lifesaving Museum, located in the 1889 Pt. Allerton Life Saving Station can provide some additional historical information about the lifesaving accomplishments of Hull in its early days.

The US Census reported, based on its 2000 census data, that Hull's population was just over 11,000. In addition, it's geographic coverage are was reported at 28.21 sq miles of which only 3.03 sq miles was land and 25.18 sq miles was water. To view how these statistics compare with other communities on the South Shore and to Massachusetts in general, click here.

Nantasket Beach , located along the eartern shore of Hull, with its rolling surf and extensive stretch of sandy shore, is arguably one of the finest sand beaches along the New England coast - stop by any sunny day in the summer and you'll see just how popular this spot is for water enthusiasts of all ages.

As Hull developed, it became a most popular summer resort destination from around the region and beyond. In the early 1800s, hotels began springing up along the coast to accommodate vacationers to its sandy shore. By the middle of the 1800s, steamboats made dailty trips between Hull and Boston. As tourists came, so came the development of the seaside boardwalk and the famed Paragon Amusement Park. Many local residents recall the days when Paragon Park was in full swing - between the park and the beach, the experience has left an everlasting collection of fond memories for many young at heart visitors over those years. The complex closed in 1984 when the property was sold for condominium development. Today, the only surviving remnants of Paragon Park on the boardwalk are the historic carousel and clock tower. The hotels are gone now, and the Hull coastline is populated by condominium developments and a collection of residential homes of all sizes and types ..... but if you listen carefully, and the wind is just right, you may still be able to "hear" the music of the dance halls, the "laughter" from the beer halls, and, just maybe, you can "glimpse" the shadows of John Fitzgerald, Honey Fitz, and many others who enjoyed their days and nights in Hull.

Hull is located roughly 20 miles by land from Boston, however its linear distance from the closest point in Boston (Dorchester) is much less. Hull is accessible to the city via two major highways, rapid transit subway rail service from Braintree and commuter boat services to Boston´s Financial District from nearby Hewitts Cove in Hingham and well as the ferry dock at Pemberton Point located at the edge of Hull Village. In addition, there is scheduled service available on the recently completed commuter rail line between Scituate and downtown Boston via the Greenbush line - the Nantasket Junction station, located in Hingham near the Hull town line is the closest station for this line.

For more information on Hull and to view listings in Hull, click here.

The content of this website is the property of Grand Gables Realty Group, Inc. All rights reserved.