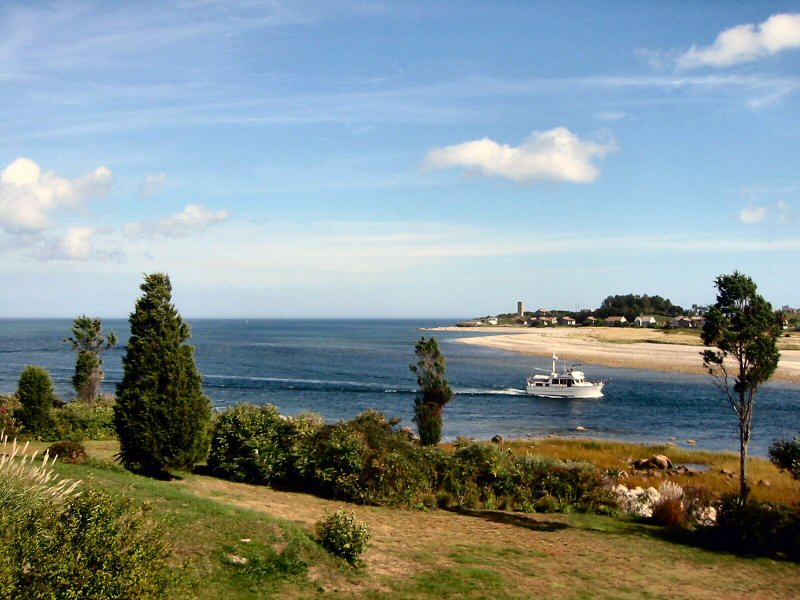 With the magnificent North River to its north, the picturesque South River to its south and the bold surf of the Atlantic Ocean to its east, Marshfield, is a true coastal town, in every sense of the word! Its extensive and diverse shoreline offers a spectacular array of scenic vistas and recreational opportunities for all. Marshfield is nestled on a gentle curve of coast overlooking the Atlantic Ocean from a seemingly endless stretch of sand beaches. Its beaches invite residents to enjoy the bracing effect of the sun-warmed surf as it breaks on the shoreline. Green Harbor is the picturesque home to the town's fishing fleet and, during the spring, summer and early autumn, provides excellent mooring for pleasure craft.

Located approximately 30 miles southeast of Boston along the South Shore of Massachusetts and approximately where Cape Cod Bay meets the Massachusetts Bay , Marshfield is accessible to the city via two major highways as well as commuter buses, rapid transit subway rail service from Braintree and commuter boat services from nearbyHingham and Hull directly to Boston's Financial District and the recently completed commuter rail line with scheduled service between Scituate and downtown Boston via the Greenbush line - the Greenbush station, located in Scituate near the Marshfield line is the closest station for this line.

The US Census reported, based on its 2000 census data, that Marshfield's population was just over 24,300. In addition, it's geographic coverage are was reported at 331.73 sq miles of which 28.45 sq miles was land and 3.28 sq miles was water. To view how these statistics compare with other communities on the South Shore and to Massachusetts in general, click here.

Marshfield is aptly named - derived from the extensive stretches of salt marsh fields which envelope the eastern edge of her landscape and extend along the banks of both the North and South Rivers and the coastal waters in and around Green Harbor.

The South River separates a land peninsula from the rest of the town - this peninsula contains the village of Rexhame as well as the Humarock sections of Marshfield and Scituate - the Scituate end of Humarock on the north end of the peninsula is also referred to as Scituate's Fourth Cliff. Scituate's Fourth Cliff was essentially separate from the rest of Scituate by a shift in the coastline resulting from a hurricane that hit the South Shore in 1898, creating what has evolved over the last century as the present day estuary of the North and South Rivers as they join with the Atlantic Ocean. This peninsula is a barrier beach and one of the few barrier beach moraines on the US East Coast.

Rich in history , Marshfield's past is a colorful patchwork of events from the burning of English tea, at Tea Rock, in support of the more famous Boston Tea Party, to a long and proud heritage of shipbuilding along the North andSouth Rivers. Rexhame (now Marshfield) was the eighth town incorporated in the Plymouth Colony, in 1640.Marshfield was home to several Governors of Plymouth Colony, notably in the Winslow family. The Isaac Winslow house is just one of many historical sites open to the public in Marshfield. Daniel Webster, the famous statesman, acquired over 1500 acres of land in the Green Harbor area and made his home in Marshfield from 1832-1852. The Marshfield Fair has been drawing crowds since 1862, conducted by the Marshfield Agricultural and Horticultural Societies, its visitors have found all kinds of attractions from ox-pulling to the North River Blues Festival to carnival rides and amusements.

Local access to Route 3 makes commuting to Boston easier than in many of the South Shore's coastal communities. Commuter buses and rapid transit rails serving the South Shore offer alternative options. HistoricPlymouth and Cape Cod are just a short drive from Marshfield. There are five elementary schools in Marshfield, one middle school and one high school, offering a variety of innovative and standard programs including work study, and special education for the emotionally disturbed and physically handicapped. Residents take great pride in the outstanding accomplishments of student athletes participating in school sports programs.

Recreation is the name of the game in town! Marshfield offers its residents miles of some of the finest sand beaches and magnificent river and marsh vistas along the Massachusetts coast. Parking is available for Marshfield residents for all 5 of the town's beaches, along with Scituate's Humarock beach. Marina facilities are offered at the Green Harbor Yacht Club, and the North River Marina, just over the bridge, in Scituate. There are two golf courses inMarshfield, the public course at Green Harbor, and the private Marshfield Country Club. Marshfield is home to the North River Arts Society which offers classes and hosts an Annual Fair for local artists in Marshfield Hills. Miles of walking trails can be found in Marshfield; the town, the Audubon Society and the North River and South River Watershed Association own several acres of conservation land and host a multitude of walking tours and boat trips, year-round, exploring the natural beauty that abounds in Marshfield.

The content of this website is the property of Grand Gables Realty Group, Inc. All rights reserved.